When I was a child, my parents’ fights could suck the oxygen out of a room. My mother verbally lashed my father, smashed jam jars, and made outlandish threats. Her outbursts froze me in my tracks. When my father fled to work, the garage, or the woods, I felt unprotected. 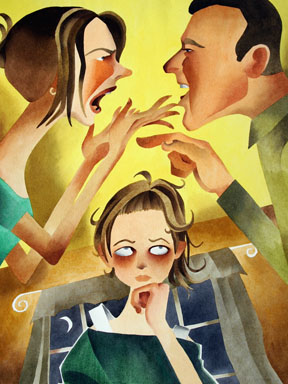 “Children are like emotional Geiger counters,” says E. Mark Cummings, psychologist at Notre Dame University, who, along with colleagues, has published hundreds of papers over twenty years on the subject. Kids pay close attention to their parents’ emotions for information about how safe they are in the family, Cummings says. When parents are destructive, the collateral damage to kids can last a lifetime.

My experience led me to approach marriage and parenthood with more than a little caution. As a developmental psychologist I knew that marital quarrelling was inevitable. According to family therapist Sheri Glucoft Wong, of Berkeley, California, just having children creates more conflicts, even for couples who were doing well before they became parents. “When kids show up, there’s less time to get more done,” she says. “All of a sudden you’re not as patient, not as flexible, and it feels like there’s more at stake.”

But I also knew that there had to be a better way to handle conflict than the one I grew up with. When my husband and I decided to have children, I resolved never to fight in front of them. “Conflict is a normal part of everyday experience, so it’s not whether parents fight that is important,” says Cummings. “It’s how the conflict is expressed and resolved, and especially how it makes children feel, that has important consequences for children.”

Watching some kinds of conflicts can even be good for kids—when children see their parents resolve difficult problems, Cummings says, they can grow up better off.

What is destructive conflict?

In their book Marital Conflict and Children: An Emotional Security Perspective, Cummings and colleague Patrick Davies at the University of Rochester identify the kinds of destructive tactics that parents use with each other that harm children:

When parents repeatedly use hostile strategies with each other, some children can become distraught, worried, anxious, and hopeless. Others may react outwardly with anger, becoming aggressive and developing behavior problems at home and at school. Children can develop sleep disturbances and health problems like headaches and stomachaches, or they may get sick frequently. Their stress can interfere with their ability to pay attention, which creates learning and academic problems at school. Most children raised in environments of destructive conflict have problems forming healthy, balanced relationships with their peers. Even sibling relationships are adversely affected—they tend to go to extremes, becoming overinvolved and overprotective of each other, or distant and disengaged.

Some research suggests that children as young as six months register their parents’ distress. Studies that follow children over a long period of time show that children who were insecure in kindergarten because of their parents’ conflicts were more likely to have adjustment problems in the seventh grade. A recent study showed that even 19-year-olds remained sensitive to parental conflict. Contrary to what one might hope, “Kids don’t get used to it,” says Cummings.

In a remarkable 20-year-old study of parental conflict and children’s stress, anthropologists Mark Flinn and Barry England analyzed samples of the stress hormone cortisol, taken from children in an entire village on the east coast of the island of Dominica in the Caribbean. Children who lived with parents who constantly quarreled had higher average cortisol levels than children who lived in more peaceful families. As a result, they frequently became tired and ill, they played less, and slept poorly. Overall, children did not ever habituate, or “get used to,” the family stress. In contrast, when children experienced particularly calm or affectionate contact, their cortisol decreased.

More recent studies show that while some children’s cortisol spikes, other children’s cortisol remains abnormally low and blunted, and these different cortisol patterns seem to be associated with different kinds of behavioral problems in middle childhood. Other physiological regulatory systems can become damaged as well, such as the sympathetic and parasympathetic branches of the autonomic nervous system—these help us respond to a perceived threat but are also the “brakes” that rebalance and calm us.

In 2002, researchers Rena Repetti, Shelley Taylor, and Teresa Seeman at UCLA looked at 47 studies that linked children’s experiences in risky family environments to later issues in adulthood. They found that those who grew up in homes with high levels of conflict had more physical health problems, emotional problems, and social problems later in life compared to control groups. As adults, they were more likely to report vascular and immune problems, depression and emotional reactivity, substance dependency, loneliness, and problems with intimacy.